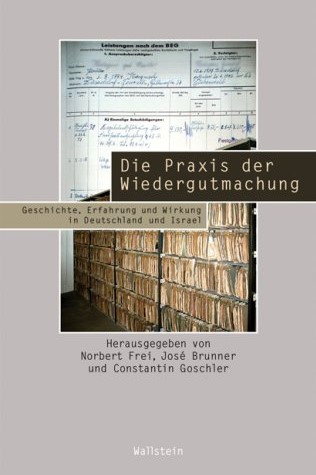 Nazi Victims and Indemnification in Israel and Germany, 1952-2002

Brief Description
The project aims to fill in a substantial lacuna in historical scholarship by inquiring into the practice of Wiedergutmachung as a critical encounter between Nazi victims and bureaucratic and legal institutions in Germany and Israel. As a consequence, the various sides involved in this encounter will be taken under close scrutiny, as well as the modalities and the results of these encounters, by following the journeys of a large number of claimants with differing identities through the complicated and often long lasting legal and medical procedures that were involved in the assessment of Wiedergutmachung claims. The aim is to create a subtle, rich and comprehensive picture of the actual practices of Wiedergutmachung in Germany and Israel, as they changed and evolved over time, rather than being limited either to an account of their formal legal and political contours or impressionistic narratives of single cases.
Due to an agreement with the Wiedergutmachungsbehörde Düsseldorf this research will be able to provide a survey of an extraordinarily large sample of Wiedergutmachung files, encompassing several hundred thousand cases. The enormous dimensions of the source material allow – in fact, necessitate – the establishment of a computerized database of the history of indemnification, which may have a substantial impact on future research in the field. In addition, a large sample of well-documented cases of different categories of claimants will be chosen for a detailed evaluation by qualitative methods. At the moment, case studies are planned on (former) Communist claimants, on a locally defined group of (returning) Jewish claimants, on victims of the Nazi sterilization program, and on the public attitudes towards indemnification proceedings in postwar Germany.
The picture gained from these inquiries will be complemented by indepth interviews with survivors, lawyers, doctors and mental health practitioners in Israel. Considering the age of all those who were involved in indemnification claims, it is of particular urgency to conduct oral history interviews as soon as possible. These will be complemented by detailed investigations in a number of Israeli archives, including state archives as well as archives of voluntary associations, support groups, memorial institutions and psychiatric clinics in which Holocaust survivors were treated.